El Korah Shrine received its dispensation July 24, 1891, and was chartered June 14, 1898 in Boise, Idaho. The name of El Korah comes from the name of the largest river in Persia (now Iran). The name was probably influenced by the fact that the Boise River runs through the city of Boise.

The membership of El Korah grew from 30 in the beginning to approximately 2,800 in the late 70’s. Due to many factors along the way, membership now stands at approximately 650. El Korah hopes to increase membership in the next several years to over 800. El Korah is the fifth oldest in the Pacific Northwest. Our charter ranks 76 among 192 Charters. The first meetings were held at the Natatorium on Warm Springs Boulevard in Boise, and in a building that housed a skating rink on Tenth Street. One of the very first ceremonials was conducted on the ground floor of the First National Bank Building in 1903 when the building was completed. 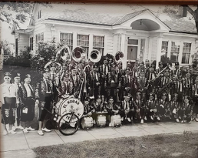 El Korah’s first home.
Their investment house off the corner of 8th and Franklin, prior to its relocation. 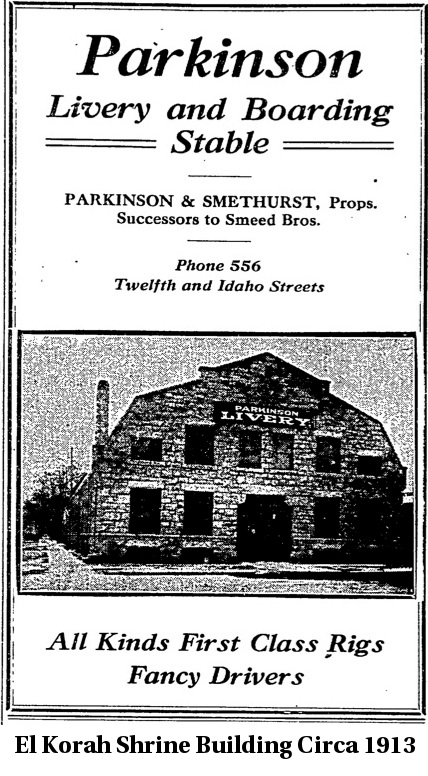 The building was originally erected in 1910. The original purpose was to serve as a livery and boarding house for horses, first owned by the Connor brothers; then purchased by the Smead brothers, who also owned another livery at six and front streets in Boise. In 1910 the Smead front Street livery burned to the ground and they bought the property at 12° and Idaho streets. Between 1911 and 1912 they sold the livery to Parkinson and Smethurst, who operated it as a barn, livery, and stable through, its third ownership.

Their investment was used during 1913 after the fire that took Parkinson Livery and Boarding Stable. The previous owners on the 12th and Idaho building. Unfortunately when the fire took place the stables were in use. Not being able to evacuate the horses they had to end up fueling the fire. Sacrificing the animals…

The building itself was originally built in the late 1800’s early 1900’s. The designer was John Everett. Tourlettotte (more info about this designer below).

October 2, 1913 a fire started in the basement of the livery while the livery was in use. Not being able to evacuate the horses, they had to end up fueling the fire, sacrificing the animals and estimated to be killing a low count of 47 horses and in some reporting a high of 60 horses; damaging most all valuable property. Though mostly covered by insurance, Parkinson and Smethurst could not, or did not want to, repair the building. El Korah had been pursuing the feasibility of purchasing property to build a new temple. 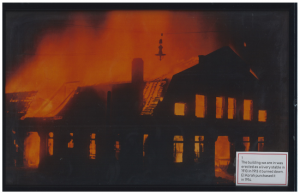 After the building was burned; and after the fire department burned what hadn’t been destroyed for the safety of the nearby school children, and the fire was finally extinguished, they knocked down the cemented walls that had been holding up either side of the barn. The only thing remaining was the sandstone walls and foundation. This was the condition in which El Korah purchased this piece of property in early 1914.

(Interesting little bit of info: the sandstone that was used in the making of this building was from the same quarry as our Capital building, which J.E. Tourtellotte was also a part of). 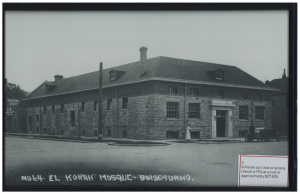 By the 1920’s there was already talks about finding a new building to suit the needs of the ever growing Shrine.

In 1921 Ill. Sir J. Harry Hopffgaten had this to say, “What the New Year has in store for us the Ouiji Board refuses to say. Our last Ceremonial Session demonstrated the need of a new Mosque, but until the financial readjustment is complete we must endeavor to make the best of our very comfortable home.”

It wouldn’t be until the late 1920’s that anything would change.

In the summer of 1928 work began on adding onto the Temple. This included our now Recorder’s Office, Band room, bathrooms, Black Light Patrol room, Scottish Rite room and extra storage for the stage. As well as what we now call our Tiger Room in the basement area of the building.

For this addition we asked the Scottish Rite Body for assistants, to which they loaned us the sum of $15,000 to which we paid back within 15 years

Boise’s El Korah Shriners got their charter in 1898 – making them as much of a city icon as their temple.

The Shriners are a national charitable fraternal organization that began in 1870, born out of a group of Masons who met regularly for cocktails in New York City.

They decided the Masons were too focused on ritual, so they created their own group focused on fun and fraternity. The 13 founding Shriners adopted the fezzes and Near Eastern theme “on a lark,” said Potentate Ron Lester of the Boise Shrine Center.

All Shriners are Masons, but not all Masons are Shriners.

By 1920, the national Shriners organization adopted the welfare of children as its charitable cause. The group opened its first Shriners hospital, one still operating, in Shreveport, La.

Today, members raise money for the 22 Shriners hospitals that operate across the U.S. No child needing medical care is turned away for lack of funds, said Lester.
The local organization’s building on Idaho Street dates to the late 1800s.

Its first use was as a city livery stable. A fire in 1913-gutted the building; 55 horses perished. The Shriners, who had been holding their meetings and ceremonies at the Natatorium, at a 1oth Street skating rink and the First National Bank building, rebuilt the damaged stable in 1914. They added an addition in 1928.

There’s a lot more than meets the eye at the Shrine Center. The Shriners’ band room still has its 1920s light fixtures. The Oasis bar and restaurant in the basement serves lunch five days a week. Technically, guests are supposed to be accompanied by a member, but no one’s likely to be turned away, said Lester.

An expansive ladies room at the Temple earned a nod from Boise Weekly in 2009 as one of the finest bathrooms in the city (think plush pink carpet and a profusion of silk floral arrangements).

Another special feature: 11 murals with a desert theme painted by Boise sign-maker, muralist and Shriner J.H. Hopffgarten in 1921. The organization is having the murals evaluated now in anticipation of restoring them to their Jazz Age glory.

Next time you’re in the neighborhood, stop by and ask a Shriner to show you Hopffgarten’s framed case of jewels and ribbons from his time as potentate of the organization.

Throughout the time that El Korah has been in this building there have been a number of remodels done. From additions to wood paneling, from coat closets to revamping one of Boise’s Best bathrooms. This building has been through it all! What is its future of the building only time will tell!

I had mentioned two names earlier, J.E. Tourtellotte as well as Harry Morrison, both famous in their own right. Tourtellotte’s designs and achievements can be found throughout Idaho and parts of Oregon. And of course Morrison of Morrison-Knudsen is almost a Family name here in Idaho but there works traveled across the United States. With earning Harry Morrison the cover of Times Mag. in May of 1954 calling him, “The man who had done more than anyone else to change the face of the earth.” 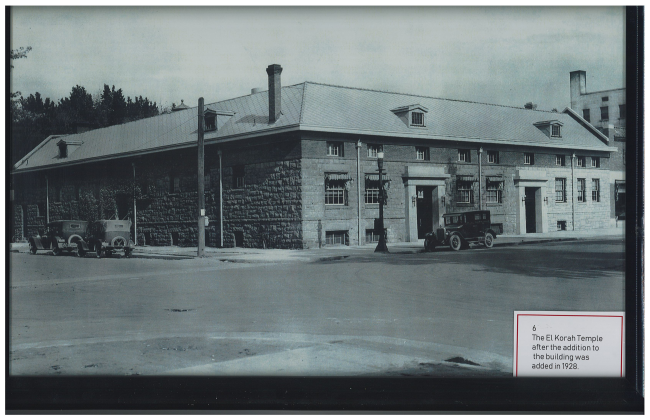 El Korah is a member of the Pacific Northwest Shrine Association and is an active participant in its annual activities. The Shrine Center was constructed in 1914 on the current site which housed a burned-out livery stable. In 1928 it was enlarged to the present size. The facilities include a lounge, kitchen and dining areas (Oasis), a ballroom where stated meetings, ceremonials and other special activities are held. It also includes meeting rooms, offices, a card room, a sitting and reading room, and an award winning lady’s bathroom (where a movie was filmed). The building also features an elevator! El Korah Shrine Center is in constant use by many units, clubs and other local organizations. We are very proud of our building and continue our relationship with our local Masonic and affiliated organizations through their use of our building as well.

El Korah’s jurisdiction includes all of Idaho, South of the 45th parallel of latitude; roughly the line formed by the Salmon River that crosses the approximate central part our great state. It is comprised of fifteen units and fifteen clubs. The oldest unit is the Black Light Patrol that was charted in 1909. They are one of the most active units in El Korah with their drill performances at our ceremonials, as well as carrying the colors in parades and circus’s. The Clubs of El Korah have increased in size as more and more Nobles develop a common interest. One of the clubs is the Gold Rush Shrine Club, They have four meetings a year which are held in Idaho City, a short drive from Boise. Idaho City is known to be one of the largest producers of Gold in the Nation in the early years of the “Gold Rush”. The Gold Rush Shrine club has many members at large, one being former President Gerald Ford.